Pancakes Around the World

Pondan.com – What do you imagine when you hear the word ‘pancake’? If you immediately imagine a brownish yellow flat cake made from flour, milk, and eggs, you are imagining classic American pancakes. Pancakes actually exist in all parts of the world, not only in America. It’s just that pancakes in other countries come in different forms, ingredients and names. How do pancakes look in other countries, including Indonesia? Check out the points below. Crepes made from a mixture of flour, milk, eggs and a pinch of salt. The mixture which tends to be liquid makes the cake produced as thin as paper. Crepes are divided into two types; Sweet crepes (crêpes sucrées) filled with fruits, whipped cream, syrup or chocolate that are commonly eaten for breakfast and desserts and salty crepes (crêpes salées) filled with meat, cheese, eggs, or vegetables for dinner. M’semen is a Moroccan-style pancake that is square shaped and rich of flavors. Made from semolina dough which is spread to thin, the dough is smeared with butter or filled with sweet stuff like honey or savory like seasoned meat. The dough is then folded many times like the process of making puff pastry and then fried or baked. 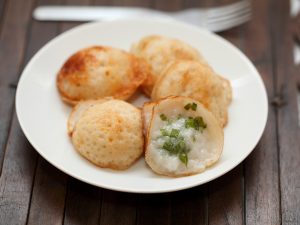 Serabi is an Indonesian style pancake that looks white on the surface and browned at the bottom. The ingredients needed to make serabi are rice flour and coconut, either in the form of thick coconut milk or grated. Serabi is cooked in a small  pot and uses charcoal fire. Traditional serabi is usually served plain, sprinkled with oncom or brown sugar syrup. But over time, the pancake is now given assorted topping, such as chocolate sprinkles, grated cheese, eggs, and others. Pancakes are quite popular in China and the most famous type is bing. Made from wheat, the bing dough is formed as thin as possible, filled with duck and spring onion then rolled up. There is also bing that has thick dough and filled with eggs or meat. Both types of bing are fried on a flat pan. Hotteok is a popular street food during winter in Korea. Made from sugar and yeast-based dough that is like bread, hotteok is given a sweet stuff like syrup, caramel, or honey. Other stuff such as nuts are sometimes added. The cake that has been filled is then closed and flattened, then baked until both sides are browned. The name Okonomiyaki comes from the word ‘okonomi’ which means ‘what you want’ and ‘yaki’ which means ‘roast’. And that’s the concept behind these Japanese pancakes: multipurpose dough, plus grated cabbage and other ingredients as desired, from octopus, squid to cheese. The mixture is then fried or baked and given nori and ginger pickles. Tortilla has been considered a staple food so many people forget his food is in the pancake category. Its thin and flexible shape has often been used in dishes such as tacos. Classic tortillas are made from corn through the process of nixtamalization which is the process of flour flour corn soaked and cooked with alkaline solutions, such as lime water.

Whatever shaped or names of pancakes you enjoy, don’t forget to try ready-made pancake flour from Pondan. Just add butter, eggs, and water, you will get 6 fluffy pancakes. Pondan Pancake comes in two packages; box and pouch. Both can be found in the nearest supermarket and your favorite e-commerce. Let’s go, make pancakes with Pondan!