Black Forest Cake without an Oven | Pondan.com –When your best friend’s birthday is just around the corner, you plan on having a small party and making your own cake. A delicious Black Forest cake would be nice, but unfortunately, you don’t have an oven. Did you know that Black Forest cake can be baked without an oven? There are two kitchen appliances that you can use as a substitute for the oven. 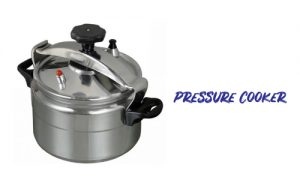 Pressure Cooker is a closed pressure pot to cook food using heated / evaporated water. Water that evaporates in a closed state produces internal pressure and makes the temperature rise. Almost all foods that are usually steamed or water-based can be cooked in a pressure cooker.

To make Black Forest cake in a pressure cooker, you don’t need to use water because you will bake the cake, not steam it. Instead, you grab a little amount of salt and spread it on the bottom of the pot. Put a metal stand in the bottom of the cooker to distribute the heat and prevent the cake from burning on the bottom. Then preheat the cooker for two minutes on high heat. Reduce the heat to medium while inserting a baking pan that has been filled with batter and then cover the pan and cook for 5 minutes. After that, turn the setting to low and bake the cake according to the recipe. Once the cake is baked, cool the cake and decorate it with cream, cherries, and chocolate shavings. Dutch Oven is a cooking pot with thick walls with matching caps. A dutch oven is usually made of iron so that it can conduct heat evenly. However, most Dutch Ovens are now made of aluminum or ceramics. This pot is considered versatile because it can be used to cook a variety of dishes, from sauce dishes, bread, to cakes.

To bake a Black Forest cake, you can use a Dutch Oven like a baking pan in general. You smear the inner surface with butter, then pour the batter and bake on a regular stove. Once the cake is baked, cool the cake and decorate it with cream, cherries, and chocolate shavings.

It turns out that without an oven, we can still make a variety of cakes. Just like Pondan which provides many kinds of cake mixes. In addition to Black Forest cake which comes in two choices, baked and steamed, Pondan also offers many cake mixes for other cakes such as Bika Ambon, Cup Cake, and Brownies. Everything is delicious, easy to make, and certainly not complicated!