History of Muffins | Pondan.com –Muffins are small, round breads with a sweet taste and best served warm. The word muffin comes from the word ‘moufflet’ which is French. The word is often used for bread and other soft foods that are baked. However, the origin of the muffins is not from France. Muffins are actually British and American specialties. British muffins have a flat shape and a hollow inside. British-style muffins were discovered by the Welsh in the 10th century. In the Middle Ages, muffin dough was cooked in a special ring-shaped mold placed directly on the stove or pan.

English muffin recipes began to appear in the early 19th century. In Victorian era, young men sold muffins with special carts on the streets and rang bells to attract buyers. People will rush to buy muffins and eat them during afternoon tea sessions. This pratice inspired the English song titled ‘Here Comes the Muffin Man’. American muffins are more like bread cooked in a muffin pan. Muffins pan are needed because muffins are made of batter not dough. Until the end of the 18th century, the batter used chemical yeast, namely pearlash which produced carbon dioxide in the batter. After that, baking powder is used to develop the dough, until now.

In the United States, there are three states that have official muffins. Minnesota with blueberry muffins, Massachusetts with corn muffins, and New York with apple muffins. 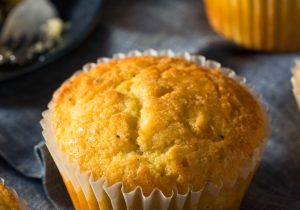 Do you want to make a muffin for breakfast or snack in the afternoon as simple as possible? Use cake premix from Pondan! It is easy to make and non fail guaranteed. Pondan Muffins are available in two flavors, vanilla and chocolate. Get Pondan Muffins at the nearest supermarket or through e-commerce Tokopedia, Shoppe, Lazada, and BukaLapak.