The History of Pudding

The History Of Pudding | Pondan.com – Mom and sis, do you don’t know that pudding in ancient times was not a sweet dessert, but a savory food that contained meat? Then why are pudding nowadays sweet and fresh? What is the history? Let’s take a look as the development of pudding over the centuries below. At Christmas, the Tudor Family has a tradition of serving meat pies that have 13 ingredients to represent God. Besides that, Tudor ate sausage-shaped Christmas pudding and contained meat, oatmeal and spices. Bread and butter pudding also became a common dish in the 17th century. 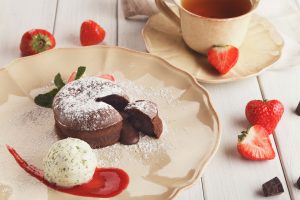 For centuries, pudding is known by its meat-based food. Only in the 19th century, pudding finally came in the form of sweet foods. Especially with the Industrial Revolution, the production of cakes and jelly began to develop. In 1837, Alfred Bird discovered custard powder.

A variety of desserts were also discovered in this century. Like Bakewell tart, which is better known as Bakewell pudding. This pudding was created by an accident in 1859. But similar puddings appeared first in the 16th century in the area and made people doubt the story of the ‘accident’. Roly Poly Pudding, Spotted Dick, Peach Melba was also discovered in the late 19th century.

That’s a short story about the development of pudding over centuries. So don’t be surprised to see meat-based savory food called pudding. If you want a sweet and fresh pudding, mom and sis can choose pudding mix from Pondan. It’s so easy to cook, just simply boiled or given hot water and completed with vla sauce. Available in vanilla, chocolate, mango, and strawberry flavors that are definitely favored by family!