Tiramisu | Pondan.com – Do you need something sweets to completed the gathering with your friends? You can choose sweet and light desserts, like tiramisu. However, do you know when and how the delicious treat was created? Let’s take a look at the short history below. Tiramisu in Italian means ‘pick me up’. This dessert is also known as Tuscan Trifle. The shape is like a pudding which usually consists of sponge cake or ladyfingers dipped in coffee drinks, cream cheese and covered with cocoa powder. It was originally made as custard. But in recent years, mascarpone cheese has been used more and more popular. According to Jane Black’s The Trail of Tiramisu article published in the Washington Post on July 11, 2007, the dessert we enjoy today comes from a recipe made at a restaurant in Treviso, Venice, called Le Beccherie.

In the 1970s, Carminantonio Iannaccone was trained as a pastry chef in the southern city of Avellino. Then, he moved to Milan to find work at the age of 12.

In 1969, he married Bruna and opened a restaurant called Piedigrotta di Treviso. He made desserts based on ‘daily taste in the region’ which was identical to strong coffee, mascarpone cream, eggs, Marsala, and ladyfinger cakes. Iannaccone took two years to perfect the recipe, which was originally served as a cake.

Tiramisu was a hit in a flash. Many chefs come to taste it. Some of them immediately made their own version or bought it from Iannaccone. In the early 80s, tiramisu can be found throughout Italy and its surroundings. 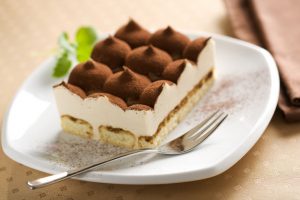 In a book by Anna Maria Volpi entitled The Eternal Art of Italian Cuisine, it was reveal that the oldest recipe was found in the book by Giovanni Capnist I Dolci del Veneto (The Desserts of Veneto). The first edition was published in 1983 and contains the classic recipe.

Food history, especially the very famous ones, has many versions and sometimes is a bit confusing. Who was really created tiramisu? Instead of thinking about it, it’s better for mom and sis to make your own at home. Moreover, Pondan has provided premix flour for baked or steamed Tiramisu. Easy and guaranteed you will not fail. Lets’s be creative with Pondan!